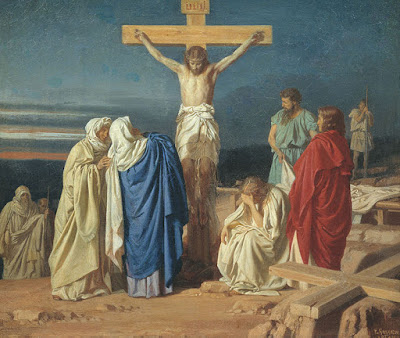 The Christian narrative has traditionally been broken up into a series of static tableaus that can easily be absorbed by an illiterate congregation of the faithful—the annunciation, the nativity, the sermon on the mount, the last supper, the crucifixion, the resurrection. These events and many others were rendered time and again on canvas and in stained glass and stone to serve not only as architectural decoration but as objects of contemplation, solace, and guidance.

The literary element came into play during the service, often most powerfully as an element of musical performance. Masses were (as they are today) patched together from various compositions, some of which took on a life of their own. One of these was the Stabat Mater Dolorosa—the Grieving Mother who stands before her crucified son.

Scholars have not been able to identify with precision who composed the verses of the poem familiarly known as the Stabat Mater, but the thirteenth-century Franciscan Jacopone de Todi is the most likely and also, perhaps, the most colorful candidate. Few read Jacopone today, but In his magisterial History of Italian Literature, Francesco de Sanctis argued that the simple friar opened out "a new road" in poetic expression, with greater sincerity and humanity than we find in the poems of his Provencal predecessors.

Iacopone’s poetry is that of a saint moved by divine love. Not for him the Provençals, the troubadours, the Courts of Love; that whole world is non-existent for him. He knows nothing of philosophy and theology, and is quite un­scholastic. Nor does he value art, or language, or style: indeed, he seems purposely to speak like the common people, just as the saints took pleasure in dressing themselves in the garments of the poor. His whole longing is to unload a heart overflowing with love—a heart exalted by religious feeling.

The fact the St. Francis's religious mission was inspired by the poetry of the troubadours ought not to be forgotten, but this doesn't undermine de Sanctis's  argument that Jacopone's poetry has a  "true vein of popular, clear, and spontaneous inspiration that we miss in the works of the learned poets..."
De Sanctis continues:

Iacopone’s works reflect Italian life under one of its aspects more truly than those of any troubadour. He gives us the reli­gious feeling in its first native expression; religion as it is found in the uncultivated classes, not clouded by theology or scholas­ticism and carried to the heights of mysticism and ecstasy. He communes directly with God, the Virgin, the saints and the angels, speaks to them with domestic familiarity, and paints them with perfect freedom of imagination, with those touch­ingly pious and affectionate details that could only be imagined by a fancy moved by love. His chief idol is Mary, and he speaks to her with the insistence and intimacy of a person who is sure of his faith, and knows that he loves.

However, after reading through the many verses of the Stabat Mater, it strikes me that there is more poetry in De Sanctis's prose than in Jacopone's Latin verses. The poem is highly repetitive, referring repeatedly to Mary's suffering as she stands before her son hanging on the cross. Evidently the poet himself cannot drum up any particular compassion at the gruesome sight of a crucifixion, because he asks Mary repeatedly to help him feel:

Come then, Mother, fount of love, make me feel the strength of your sorrow so that I may mourn with you.

The sentiments are slightly bizarre. The poet is asking Mary to help him feel her sorrow, but he doesn't seem to be directly  interested in Jesus's suffering. Yet he later decides he wants to share in that suffering, too, and he asks Mary once again to help him:

Make me by his wounds be wounded, make me inebriated with the cross and  with the flowing blood of your son

Chock it up to extreme viceral bewilderment in the fact of suffering. But as sixty years of rock 'n' roll have taught us, repetitive and nonsensical  lyrics can have a powerful effect when they're driving music of genuine emotional power. And that's what the Stabat Mater has done, time and again. Many eminent composers have set the poem to music, among them Palestrina, Pergolesi, Alessandro Scarlatti, Vivaldi, Boccherini, Haydn, Schubert, Rossini, Verdi, Szymanowski, Poulenc, and even Arvo Pärt.

I have CDs of most of the famous works, mostly by coincidence, and I was almost starting to think of them as a "collection," but I recently came upon a blog maintained by a man who owns more than 500 recordings of different compositions based on Jocopone's poem. He's reviewed most of them on his blog, which also provides eight or nine English translations of the poem itself.
___

We went down to the Ordway the other day to hear the SPCO do Pergolesi's version, which is my favorite. (You can listen to a performance with a slightly larger orchestra here.) I learned in the program notes that based on its publishing history, Pergolesi's Stabat Mater might well have been the most popular composition of the eighteenth century. I can see why. An economical forty-minute piece written for soprano, alto, organ, and small orchestra, it consists of a series of solos and duets, and the music is plaintive, cutting, haunting, lyrical, and occasionally quite buoyant, considering the subject matter.

In the first half of the SPCO program, a concerto grossi by Loccatelli was coupled with a very early symphony by Haydn; it seemed interminable, though it was only half an hour long. The second half was devoted to the Stabat Mater, and it went by in a flash.

The streets were glistening as we walked back to the parking ramp in the rain through downtown St. Paul, surrounded by clumps of women and men wearing green Minnesota Wild jerseys. The Wild had just lost their second straight playoff game at home, and a promising season was on the verge of going up in smoke, but no one seemed too upset about it. Well, what can you do?

I probably should have been thinking of the suffering of Mary, but I was actually thinking about the beauty of female voices in close harmony. Death is the mother of beauty, Yeats says somewhere. (Or was it Kawabata?) But I think Pergolesi deserves most of the credit here for weaving these two voices into such a complex and moving emotional experience. Sorry to say, he died at the age of 26, not long after completing this enduring work.
Posted by Macaroni at 10:41 AM

Macaroni
The Macaroni blog is dedicated to the subjects that have enlivened the print edition of Macaroni for more than twenty-five years - travel, films, food, ideas, music ... you name it. My name is John Toren. I write the blog. If you're interested in lengthier forays into the same fields track down a copy of my new book,All the Things You Are or my previous book By the Way. For a closer look at the state of Minnesota, check out my travel book, The Seven States of Minnesota.