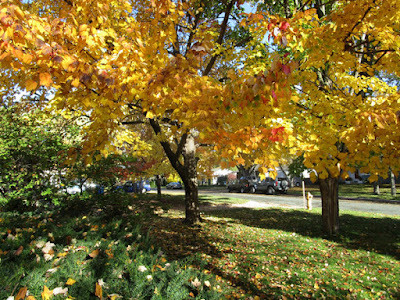 It was one of those stunning mornings after an overnight  rain, cool and wet and bright with sun. Yellow leaves on the trees, tending toward orange-red here and there.

I had gone to pick up some vegetables for soup and other concoctions; the store was largely deserted, a seminar was underway in the produce department, and I thought to myself: "That's what I should have been: a produce stocker."

For a split second I even entertained the thought that maybe it wasn't too late! No, it is too late.

When I stepped out into the glaring sun of the parking lot, I was pleasantly reminded of a parking lot I crossed in Apache Junction, Arizona, many years ago on a similarly brilliant morning. There was a cactus wren hopping around amid the litter that morning, and there might even have been frost on the concrete. But the essential quality was unbounded light and joy. Just like yesterday.(And today)

How do we explain this flashback? It might have been because I was listening to a Carlos Nakai CD on my way to the store. Why? Because I'm getting a string of digital images together for a talk I'm scheduled to give on Friday about the National Parks. Earlier in the morning I'd been sorting through a few scenes of Canyonlands. 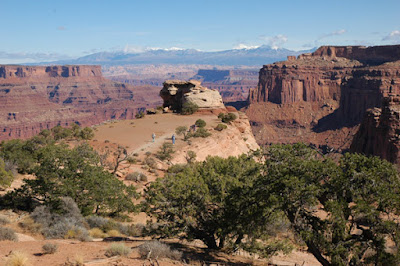 No point in talking about the Maze. Few in the audience of fifty-odd retirees are likely to be going there any time soon. But what about Horseshoe Canyon, with its spooky Barrier-style petroglyphs? It's a seven-mile hike there and back down the floor of a deserted canyon, but nevertheless it would be well worth showing some images of the art.

I had planned to cook up some broccoli-wild rice casserole for my in-laws, who are experiencing some mobility constraints, but in the end I decided to make a batch of what I call Beltrami Salad.

Count Beltrami, as you may know, was an Italian adventurer (but not a count) who hooked a ride on a steamboat with Stephen Long in 1823 up the Minnesota River, then down the Red River of the North. Long had been sent to determine where the border between the United States and British territories lay; Beltrami was confident that he was about to discover the source of the Mississippi River through the back door, as it were. He hired an Indian guide who abandoned him somewhere on the Red Lake River, but Beltrami persevered,  hauling his canoe upstream single-handedly, and eventually arrived at a body of water he named Lake Luisa, in honor of his girlfriend.

It isn't the headwaters of the Mississippi ... but there's a monument on a hill nearby commemorating Beltrami's near-miss.

Beltrami Salad is part Italian and part Native American. It consists of wild rice mixed with orzo and flavored with sautéed shallots and tarragon—a bit of a French touch. There were some mushrooms in the fridge getting old, and I cooked some of them up, too, and tossed them in. 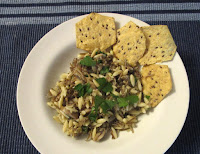 The smell of wild rice cooking reminds me of wet tree bark. A woodsy, autumnal smell. Hilary cut a handful of parsley from the front garden, and I tossed that in, too.

The day had remained stunning throughout, but as twilight approached I was looking around for something suitable to read—something to sustain the pastoral yet vaguely ecstatic mood. Patrick Modiano, the lugubrious French novelist? No way. Alexander Hamilton: from Obscurity to Greatness? Too political. I finally hit upon something that suited the moment perfectly: Good Seeds—A Menominee Indian Food Memoir by Thomas Pecore Weso.

In this short book (113 pages of text) Weso describes growing up on the Menominee Reservation, his focus being on the things he hunted, the crops he and his relatives grew, and the berries and nuts various members of the tribe gathered. The book has a quiet tone, direct, honest, charming, and curious rather than edgy or strident. The first two chapters set the mood, with grandmother cooking downstairs while grandfather prays—or "dreams," as Weso puts it—upstairs.  Subsequent chapters are devoted to fishing, hunting, and fruit-gathering, though there are also chapters about German beer and Wisconsin Diner food. Each chapter concludes with a few recipes.

Weso's grandfather looms large in the early pages. He comes across as a leader, a diplomat, someone not only capable of building bridges between whites and Indians, but also aware of how important it is to do so. Weso reports that he was thirty-five years old the first time he saw his grandfather in traditional Indian garb. It was at a peyote ceremony of the Native American church. His grandfather was wearing a headband more intricate and idiosyncratic than any he had seen before, and he speculated that it dated from pre-contact times. He considers it a reflection of how highly esteemed in the community his grandfather was.

"I can now see," Weso writes, "that Grandpa was trying to create a political climate in accordance with a spiritual climate, and I think people expected him to do this in his role as a medicine man. My grandfather talked to white people, black people, Indian people, and he tried to learn how to interact with each equally...  My grandfather never told boastful stories about himself, as he was very modest, but he was a leader."

The good-natured tone of Good Seeds is no doubt a reflection of Weso's success at absorbing the teachings of his revered grandfather, from whom he learned that even the simplest daily tasks could carry far more than a merely practical import.

"Part of Grandpas teaching was gardening. We always had a family garden. If any of us went to the garden to do some watering or hoeing, we could see our efforts bear fruit. That reward also had a spiritual aspect."

Good Seeds isn't a self-help book, however, and once having introduced us to this "philosophy," Weso wisely proceeds to describe various food-related activities on the reservation that he thinks might interest his readers. Here are a few typical remarks:

"When I was young, I thought a deer was a big animal, but it is not, especially on the reservation. A deer is really a big rabbit. It is tasty, and if a deer is available, it is welcome. Venison stew tastes delicious. But comparatively, it is the runty ungulate after bison, then elk. There was this guy on the rez with a huge appetite who could sit down and eat an entire deer. People did not like hunting with him."

"Bears are another source of meat on the Menominee rez, but I was never much of a bear hunter. I was a good shot, and I did not mind killing a squirrel, a rabbit, or a partridge. Even if it had a soul, it could not be a very big soul. I could not, however, bring myself to kill bear. I did kill one as a young man, and that was enough. It was like killing another man."

"Any time a group of people live together, suddenly there is no firewood within walking distance."

"The body of a beaver is about the size of the body of a white-tail deer...Some people like the taste of beaver, but to me it is less desirable—though it does taste better than muskrat or raccoon."

"On the rez are many edible ferns. Fiddleheads, curled-up shoots of ferns, are not that deli­cious. They are slimy, mucilaginous, and furry. The ostrich fiddle- head fern is edible—not poisonous. I could not eat a pot full."

"Generally blackberries grow where bears live, and there are mosquitoes. All in all, the mosquitoes are worse than the bears."

In his youth, Weso was influenced by the writings of Euell Gibbons, like many other outdoorsy types, including me. "I was from that generation," he says. At another point in the narrative he writes, with both humor and candor:

"This was during President Lyndon Johnson’s Great Society, the era when people were expressing their cultural heritage more readily. Headbands had become a common thing. Anyone with one re­cessive Indian gene wore a headband. Those were the days when I always had a pair of moccasins. From early spring to late fall, I wore only moccasins, not as an expression of culture, but because they were very comfortable." 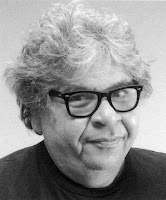 The portrait he paints of reservation life is relaxed and multifaceted. His grandmother, who also looms large throughout the book, worked in a store from six-thirty a.m. till dark, and often served canned sauerkraut at the dinner table. Though she sometimes reminisced about traditional foraging techniques, she was not nostalgic for those days.

In the last two chapters, Weso returns to the family and community life of the reservation, the local fair, the powwow, and the challenges of food storage when serving ten or twenty hungry people daily. In the final chapter he even describes the malevolent spirits that danced on the walls and seemed to live in the furnace room of the family home, which had previously been a jail. He speaks fondly of photos taken of himself outside the house as a young boy, sitting on horseback with Hopalong Cassidy six-shooters hanging from his belt—a gift from his uncle Billy, who was as near to being a father as anyone was. Several times he mentions in passing "when my uncle Billy was murdered" but doesn't elaborate, and it gives an unsettling twist to the notion of "spirit" that has carried us through this generally low-key, heartily sincere, and often delightful book.

Macaroni
The Macaroni blog is dedicated to the subjects that have enlivened the print edition of Macaroni for more than thirty-five years - travel, films, food, ideas, music ... you name it. My name is John Toren. I write the blog. If you're interested in lengthier forays into the same fields track down a copy of my new book,All the Things You Are or my previous book By the Way. For a closer look at the state of Minnesota, check out my travel book, The Seven States of Minnesota.