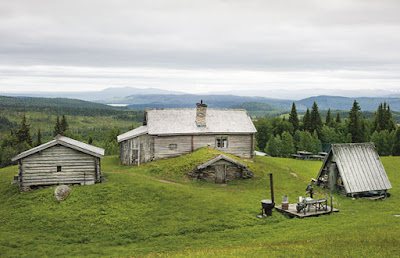 Magnus Nilsson is an internationally renowned chef (32 years old) whose  restaurant, Fäviken, is currently ranked number 19 on the San Pellegrino World’s Best Restaurants list. The restaurant sits in the basement of a lodge on a remote island in the Baltic Sea 270 miles north of Stockholm. I suspect neither you nor I will be going there any time soon.

What we can do is stop in at the American Swedish Institute in South Minneapolis to see some of the snapshots Magnus has taken of Icelandic landscapes, exotic sea birds, farmhouse interiors, men harvesting guillemot eggs on sea cliffs, and moss soup. 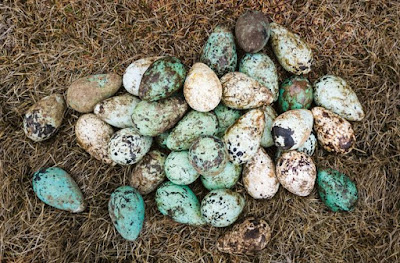 The photos come from Magnus's recently published book, The Nordic Cookbook. The show itself has been given the title Magnus Nilsson's Nordic: A Photographic Essay of Landscapes, Food and People, and when the images are blown up to six by ten feet, they're wonderful to behold.

Well, anyone with an iPhone could take spectacular  photos of the Nordic countryside nowadays, and Magnus knows that. In one of the text panels he remarks that he has always enjoyed taking snapshots, and doesn't care much whether they're good or bad. It's just a record of what strikes him as interesting or beautiful at a given time. 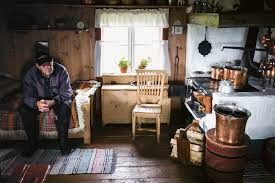 The show is given added dimension by the connections with food and cooking. It's a sense of rural simplicity combined with deep knowledge of local plants and animals, a "peasant" environment but with serious craftsmanship, historical patina, and sophisticated tastes.  In viewing the photos, we feel we've once again entered the realm of fairy tales, although the payoff (as it were) comes not at the conclusion to the story, when the frog turns into the prince, but in the majesty of the frog himself ... or the wooden silo, the earthen baking pits, the caribou on the hillside, the eggs in the nest. 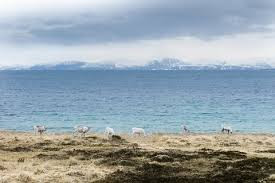 It was a stroke of genius to scatter wooden recipe boxes here and there throughout the exhibit. Each box contains multiple copies of three or four recipes, and each selection is different, so you could emerge from the show with ten or twelve recipe cards and save yourself the $50 cost of the book.

Right now I'm looking at a recipe for smoked eel and scrambled eggs. Here's one for moss soup that reminds me of my Boy Scout days. Then there's the one for Icelandic rye bread, and another for puffin stuffed with cake.

The back of each card contains additional cooking information along with historical lore. For example:

Puffins on the Faroe Islands are most often filled with a sort of cake batter mixed with raisins, sewn shut and braised, or just braised without the cake. The batter can also be wrapped in little pouches of aluminum foil and braised together with the birds rather than inside them. Leave the plucked, gutted and cleaned puffins to soak in cold water overnight before cooking them. They have a peculiar but tasty, fresh-ocean flavor to them, which can grow very strong and a bit heady for my taste if they are not handled well.

The exhibit was further bolstered by photos taken at his restaurant, a small display of wooden bowls and utensils made by local artisans, and a three-minute video of Magnus himself talking. He seems like a down-to-earth guy, fun-loving, adventurous, and not terribly stuck on himself. (You can read an interview with him here.) 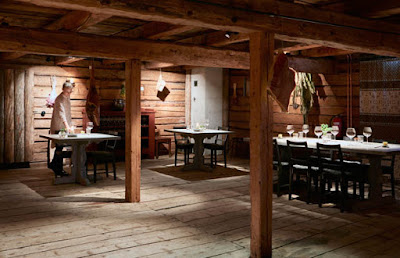 Athough the photo of shark-meat smorebrot near the end of the show was less than appetizing, we were nevertheless keen on getting a snack of some kind at Fika, the Swedish Institute's pleasant café. In the end, however, we decided that there were too many things in the fridge back home that needed to be eaten soon, including some aging green beans and a clump of wilting fresh dill. So we stopped at Lund's on our way home and picked up a few things to flesh out an early summer meal. 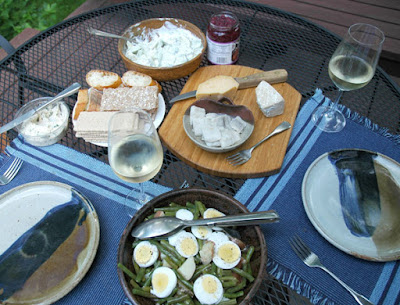 Macaroni
The Macaroni blog is dedicated to the subjects that have enlivened the print edition of Macaroni for more than twenty-five years - travel, films, food, ideas, music ... you name it. My name is John Toren. I write the blog. If you're interested in lengthier forays into the same fields track down a copy of my new book,All the Things You Are or my previous book By the Way. For a closer look at the state of Minnesota, check out my travel book, The Seven States of Minnesota.